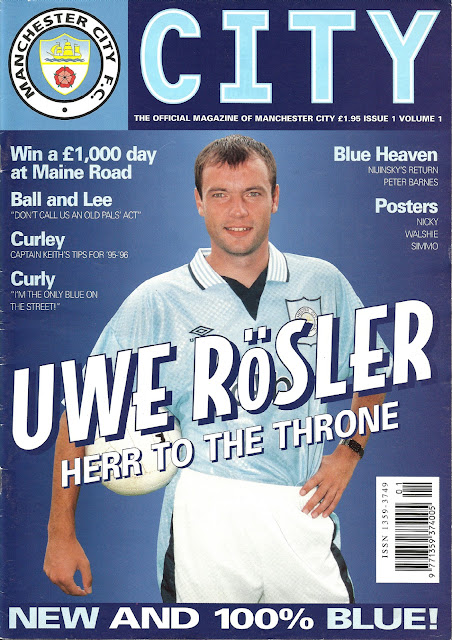 Sad news that the official City magazine (or ManC as it's known now) wont be published any more after the 200th issue (August 2012).  The first issue, which is pictured above, was produced in September 1995 and featured Uwe Rosler on the cover.  An interesting welcome message from the Editor, Steve Anglesey,  recalls how he started supporting City because of a boiled sweet!  The story started with him being taken to Old Trafford to watch United with his uncle and choking on a sweet, he survived and vowed never to go to OT again!  Another member of Steve's family took him to Maine Road where he was converted to a blue.  Features in issue 1 included interviews with Rosler, Alan Ball, Francis Lee, Colin Bell, Peter Barnes, Keith Curle, Michael Brown and 'Coronation Street' actor Kevin Kennedy.  I feel as though the magazine went downhill after it was revamped and changed it's name to ManC.  I liked the feature's on history and the match reports in the old City magazine and I wasn't really interested in the fashion and 'lifestyle' features in the new one.
Posted by 1894 at 14:38