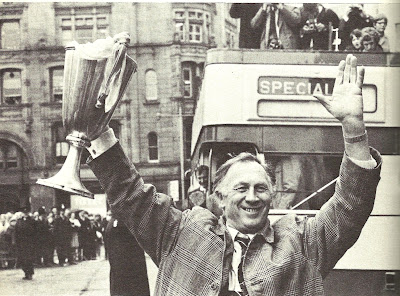 City didn't always struggle in Europe!  Joe Mercer with the European Cup Winners Cup on their victory parade in Manchester 1970.  In my opinion the pressure for City to succeed in Europe is very unfair.  The media seems to delight in everything that goes wrong for City in the Champions League, conveniently forgetting they were playing in the most difficult group this year.  It took Chelsea years to win the Champions League, despite their vast wealth, so why the pressure on City?  Another Premier League title will be enough for this season, Europe can wait!
Posted by 1894 at 15:45