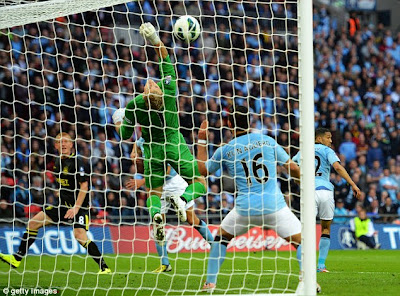 Manchester City produced a strangely subdued performance against Wigan,  eventually losing to an injury time goal.  City were overwhelming favourites to win,  having beaten Wigan twice already this season.  It says a lot about City, and how far they've come, when finishing 2nd in the Premier League and being FA Cup finalists is deemed as a 'poor' season!  Mancini's failure to deliver a trophy will probably result in the Italian losing his job as manager, even if he did win the Premier League and the FA Cup in previous seasons.  I'm looking forward to next season, it will be interesting to see who City buy in the summer and who leaves from the current team.  There is also the matter of United replacing Alex Ferguson with David Moyes, who will be under immense pressure from the start to keep winning trophies.  It's not the end of the world or the lowest point in City's history, but it's still very disappointing to lose any final.
Posted by 1894 at 09:43