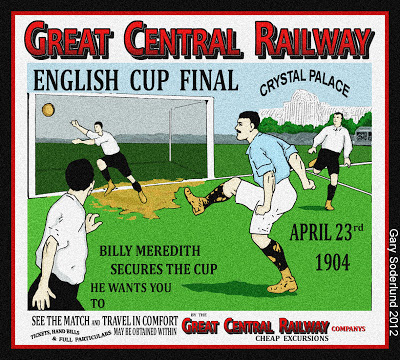 This is a poster from 1904 which correctly predicted that Billy Meredith would win the cup for City in the FA Cup final against Bolton Wanderers.  I've only ever seen the black and white picture of this poster in the book about Meredith called 'The Welsh Wizard', so this version had to be drawn and coloured using Photoshop.  This is NOT a copy of the original poster, as many people who have 'borrowed' it for their websites (including the official City site!) seem to think, only my version of it!
Posted by 1894 at 13:33

That is an amazing poster. I found a quote from a Bolton player complaining about it days before the Cup final. Wonder if the poster got to him?